Material analysis has been conducted by Dr. Nicholas Eastaugh, of the University of Oxford, in London. Dr. Eastaugh heads up the Pigmentum Project, an ongoing effort to create the world’s most complete library of research on materials, fingerprints, and DNA for the art world. Dr. Eastaugh has analyzed initial samples from the collection, and they have proven to be consistent with known materials available at the time of Pollock. But paint analysis as a field has emerged as a thorny issue for the art world, as people representing themselves as experts seem to have fallen into a disagreement about when and what materials were available to Pollock. Reputable experts have given statements such as, “I don’t think he used house paints,” and “He didn’t use acrylics,” when such information is clearly confirmed in eyewitness accounts of Pollock’s working methodologies. All this misinformation clouds the picture and makes analysis more difficult than it needs to be. In order to prove what materials Pollock actually used, it would be very helpful to sample known works. However, owners of authenticated works by Pollock are understandably unwilling to let their very valuable pieces be tested for comparisons to unauthenticated works. They have nothing to gain, and generally fear there is much to lose. This misconception is difficult to overcome. The great tragedy of this exclusionist policy is that newly discovered works by Pollock could add immeasurably to the understanding of the artist’s true genius, and add more significance and stature to the value of all his work. Paintings from the collection are being tested for chemical matching to paints verified to exist on the floor of Pollock‘s studio. The canvases have also been tested and fit the correct time frame for use by Pollock. It is worthy to note that other experts have conducted materials analysis on this collection. Not all the experts agree on all the materials, (could they ever all agree on anything?) So costly analysis continues with no guaranteed results offered at any date as yet. In a notable contribution to authentication science, Dr. Eastaugh has published a superb scientific paper noting “Termination Dates” as evidence for novel materials being available to Pollock, and other artists, before the time that they were actually patented, or made available to the wider public. Even more intriguing, that some painters created ‘cocktails’ of materials that were unique to each individual painter. Dr. Eastaugh has identified a special limestone extender that was unique to Pollock, which has been found in the studio, and that also appears on pieces from Pollock’s Paradigm. This seems likely to fall into the category of “beyond a reasonable doubt!”

A Letter from Dr. Nicholas Eastaugh Ph.D. Dr. Nicholas Eastaugh Ph.D.; Dip. Cons.; B.Sc. SCIENTIFIC EXAMINATION REPORT Subject: An Untitled Composition thought to be by Jackson Pollock Our ref.: 071400.B7.01 Date: 16th November 2007 Seven paint samples taken from an Untitled Composition thought to be by Jackson Pollock have been examined using a suite of standard analytical techniques considered suitable for the characterization of historical paint1. This report presents the preliminary results from this analysis, specifically focusing on whether there are any overtly anachronistic pigments present that would immediately preclude an attribution to Pollock. As a secondary function, some observations will be made about the similarity between the pigments found and those known to have been used by Pollock for his dripped and poured works. Additionally, some areas requiring further work will be highlighted, including approaches that might be useful for the group of paintings as a whole not performed thus far. These analyses have been conducted in the context of ongoing research into the materials and techniques of Jackson Pollock being carried out by the present author and close colleagues that now encompasses results from Pollock’s studio materials and a number of his paintings in public collections. Some of this material has already been published, while further publication is planned for the remaining data. However, the results to date were available for reference in this study. A variety of colors was represented by the samples, a number of the fragments including more than one; consequently there was scope for a wide range of pigments also to be present. Colors included brown, blue, red, green, black and yellow, while in one fragment there was also a small amount of a silvery metallic pigment. Pigments identified included a titanium dioxide white, calcite, phthalocyanine blue and green, a carbon-based black, an organic yellow (probably an azo compound) and two organic red compounds (not fully identified). None of these is overtly anachronistic for a work by Jackson Pollock. A specific issue in the recent case of the so-called ‘Matter’ Pollocks was the apparent presence in a number of them of red DPP pigments. DPP pigments (diketopyrrolo pyrrole compounds, hence ‘DPP’) may have been discovered in the 1970s, but are currently largely considered to have become commercially available in the 1980s. As a result of this, pigments of this group are important both as date markers and counter-indicators for works by Pollock. The organic red compounds present in B7 were checked against reference material of CI Pigment Red 254, a DPP pigment; these were not a match. The relationship of the pigments found in B7 to those favored by Pollock is more complex. In terms of direct comparability, there are seemingly both similarities and differences. For example, Pollock appears to have favored the use of a synthetic ultramarine-based blue, while in B7 the blue is based on a phthalocyanine compound. On the other hand, there are various other pigments which are apparently of a comparable type to those found during the analysis of the Pollock studio material and paintings, including an ‘extender’ pigment based on a crushed limestone. Further analysis would undoubtedly benefit this research, allowing us to both extend our knowledge of the pieces in the collection and address the attribution questions more thoroughly and reliably. In particular, the following are proposed:

Introduction: This report contains summary information on the analysis of Pollock’s Paradigm painting J2, a work measuring approximately 26 inches by 40 inches  (above right) executed on paper. It was previously examined and a series of eight paint fragments were removed. These paint samples were subsequently transferred directly into the hands of Dr. Nicholas Eastaugh (NE), who has maintained holding since. This report will focus on the results of the analysis of these paint fragments. Details of the analytical techniques applied to the paint (including the protocols employed) are presented in a separate document, these being relevant to the group of paintings as a whole. However, in brief, the techniques concerned from which the results discussed here arise were:

All are standard approaches in the study of historical paint materials. In the main, these techniques reveal data relating to the pigments present. Additionally, however, some information on binding media can be derived from the FTIR data, such as the presence of nitrocellulose lacquers and alterations resulting from certain pigment-medium interactions, as well as providing a tentative initial view on the presence of oils and other synthetic compounds. Further analysis is pending using gas chromatography-mass spectrometry (‘GC-MS’) and pyrolysis-GC-MS (‘Py-GC-MS’) to fully resolve the nature of the binding media. Additionally, studies by FTIR imaging have not yet been conducted. Specific results from the various analyses are tabulated below (Appendix I) and representative spectra from EDX, Raman, and FTIR attached (Appendix II). The principal compounds identified will be discussed below and the immediate implications outlined. A more detailed discussion of each compound in the context of Pollock’s Paradigm as a whole will be presented in a separate overview document. For example, brief indications of relevant dates associated with pigments such as known patent dates will be given here, but the overview will discuss the specific patterns of historical use in greater detail. Similarly, where there are points of correlation with previously analyzed Jackson Pollock material of good standing such as the Pollock-Krasner Studio (‘PKS’) paint cans, this will be mentioned here but discussed in greater depth elsewhere. 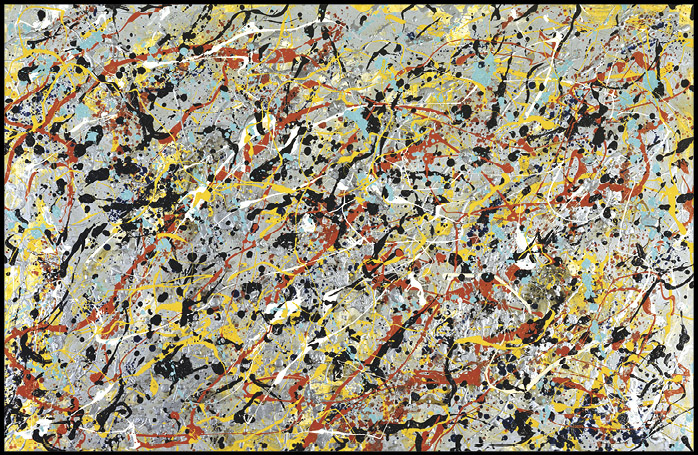